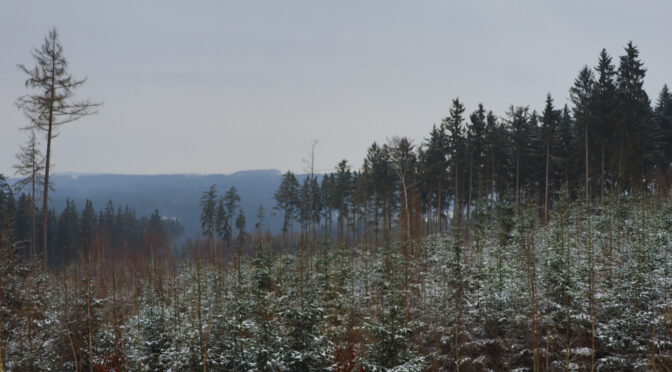 As my grandmother fled 1945 from the advancing Red Army to Bavaria with her little baby girl (my aunt) in her arms, she had to go westwards across the territory of the then so-called “Protectorate of Bohemia and Moravia“, an endeavor that was unimaginably dangerous in a war-devastated Central Europe.

It was the most straightforward route from the home-town of my grandmother’s family Breslau (today Wrocław) in Lower Silesia to the comparatively save south of the Reich, where the Americans were expected to install their version of an occupation régime.

The state of Czechoslovakia, an immediate neighbor of Germany, had ceased to exist in 1939 after several stages of dismemberment and military occupation.

Nazi-Germany imposed a system of brutal oppression in the newly established Protectorate (this entity comprised roughly modern-day Czechia minus large border-areas) in order to exploit the resources, the advanced industrial capacities and the human labor of this region for its future military offensives.

In the end phases of the 2nd World War as the Nazi military apparatus was about to collapse and the scattered remains of the Wehrmacht were retreating westwards, it became a life-and-death matter to be recognized as a German in Poland, the former Czechoslovakia or any other Eastern European country which was to be occupied by the Soviets.

So the rest of my family (my grandfather and other family members were forced to fight at the crumbling front, or were in war captivity) had no alternative as to flee across Bohemia towards Bavaria as well as thousands of other Germany civilians in Silesia, deeply terrified already by frightful rumors and the yet remote but incessant thunder of the Russian artillery.

Karlsbad (the German name for Karlovy Vary) is a city in West Bohemia with 50.000 inhabitants renowned for its numerous spa water sources and its location in a unique area encircled by the Ore Mountains (Erzgebirge) in the north and the Bohemian Forest in the west.

It is quite close from my hometown Nuremberg, around three hours at most.

You have to change the train in Cheb (Eger), a city with some 30.000 inhabitants situated at the border to Bavaria and itself a worthwhile destination for a stay. If you are short of time, I would recommend to take a look at the Špalíček (Egerer Stöckl) on the Marktplatz at least, an interesting architectural relic of the Middle Ages.

On a rather chilly summer day I decided to hike alongside the river Ohře to the town of Loket (and retour), seventeen kilometers westwards of Karlovy Vary.

It is an easy walk through a mostly plain terrain. The only thing what made it a bit more challenging for me was the weight of my backpack that contained my entire photo equipment, food and water plus some additional clothing because of the rainy weather.

Near Doubí, a town about midway on my hike, a noteworthy natural monument can be marveled at: Svatošské skály, bizarre stone formations which provide a setting and fruitful material for myths and fairy-tales in the Czech and German folklore.

Loket (3.000 inhabitants, German: Elbogen) is undoubtedly one of the most intriguing places in West Bohemia. Beside the town center itself it is first and foremost the well-preserved Castle (Hrad), which must not be missed by any visitor.

Worth a visit is also the beer and feeding cups (Schnabeltassen) museum at T. G. Masaryka.

Thirty-five kilometers of hiking was not so bad an accomplishment for a single day, so I was happy returning to Karlovy Vary in the late evening (pretty wet from the rain) and drink two or five delicious Czech beers in “Goethe’s Beer House”.

Andělská Hora Castle is a castle ruin in the eponymic village, which can be reached from Karlovy Vary in about four hours on a first red marked, later yellow and green marked trail.

The castle complex was built on a prominent elevation of 717 meters height (Hora means mountain) in the 14th century, but the structure deteriorated in the course of the 16th and 17th century to the state that can be looked at today.

A detour on the yellow marked trail leads to Šemnická skála (645 meters), a rocky hill lying around three and a half kilometers north of Andělská Hora.

Unfortunately the visibility was rather poor on this hazy winter day, so it didn’t make much sense to shoot a lot of photos.

My grandmother reached Bavaria safely in 1945, and re-united with my grandfather who was released from war captivity soon after the unconditional surrender of the German Reich.

Despite all their material losses, they had had enormous luck.

They both were healthy, still comparatively young, and possessed the education and skills to build a prosperous butcher business in Bavaria in the decades after the zero hour.

Barely do I have any idea of the struggles and challenges they faced during those years in and after the war.

My small hikes were therefore nothing more than insignificant adventures while being granted temporary respites from a global pandemic, nothing in comparison with a week-long march through a hostile country in one of the most gruesome conflicts in human history.