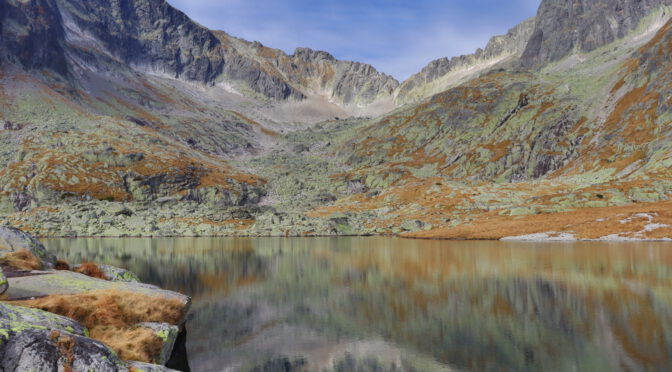 This blog-post is a continuation of a past article about hiking tours in the High Tatras mountain range1.

Like in summer 2020, the plan was to cross some of the elongated valleys in the High Tatras and to negotiate two particular mountain saddles.

This year these two saddles had to be Sedlo prielom and Sedlo sedielko (colored brown on the map below, the 2020 tours are in orange).

1 notes, footnotes and references about translations apply for this article in the same manner as for the other blog-posts about the High Tatras on this website

Most visitors will traverse this saddle in order to reach the small settlement Tatranská Javorina (1000 meters) at the Polish-Slovakian border, and start either in Tatranská Lesná (915 meters) or in Starý Smokovec (1010 meters).

My starting point was in Starý Smokovec. Setting off at the TEŽ trainstation, the green marked trail led me to Hrebienok (“Little ridge”, 1285 meters), through about five kilometers of Malá studená dolina (“Small cold valley”) and then to the Téryho chata on 2015 meters.

This section took me about four hours, yet an exhausting part of the tour was still lying ahead.

But it was also the most intriguing part, for you can marvel at some of the highest summits of the High Tatras and the Päť spišských plies that literally surround the Téryho chata.

Päť spišských plies are five (päť) mountain lakes (plies, genitive plural form of pleso) of different sizes which were, at this very time of the year, not yet frozen solid as other mountain lakes in the High Tatras.

Climbing the saddle eventually turned out to be tiring, but technically not very challenging. Compared to Priečne sedlo, that isn’t far off from Sedlo sedielko, it’s actually a pretty easy ascent.

Time didn’t allow to march the whole distance to Tatranska Javorina unfortunately, so after reaching the saddle and making some photos I turned back whereby my descending route became identical to my ascending route.

For reaching Sedlo prielom (Polish: Rohatka, 2290 meters) I ascended to Hrebienok from Starý Smokovec (1010 meters) like the day before.

A kilometer further north at the Rainerova chata (1301 meters) I turned westwards on a blue marked trail, leading me directly to the refuge Zbojnícka chata (“Robber’s cottage”, 1960 meters).

From the blue trailhead on, it’s basically marching for three hours straight through Veĺká studená dolina (“Big cold valley”), over an easy to follow rocky path with few via ferrata sections.

It was wise to make a longer break at the Zbojnícka chata, since climbing the saddle was way harder than expected (some internet-sources claim a difficulty of  B/C) and slightly impeded by freshly fallen snow and poor visibility.

I also didn’t traverse the saddle in its entirety (i. e. proceeding to Poľský hrebeň) because of the unpredictable weather conditions and the lack of time. I had daylight for just around two more hours and didn’t want to hike through for me unfamiliar terrain with only a small headlamp.

So, again, after reaching the saddle and making a couple of photos I turned back whereby my descending route became identical to my ascending route.

I am glad about the fact that I was able to visit many of the accessible areas in the Slovakian part of the High Tatras in the past two years, despite travel restrictions and my usually tight schedule as to personal projects.

Consequently, I should steer for peaks on the Polish side on the next occasion, or make a tour with a mountain guide to Gerlachovský štít, the highest summit in the Carpathian Mountains (2654 meters).