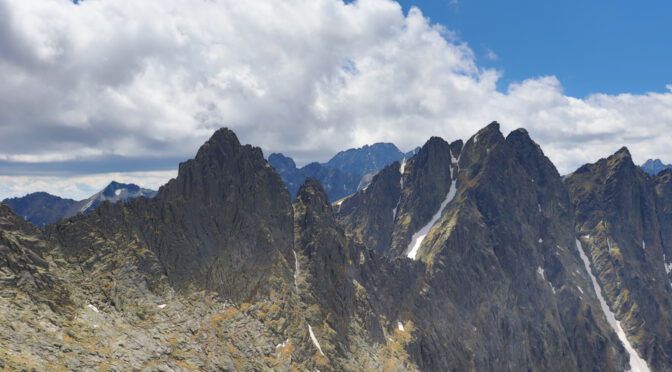 Javorová dolina is an elongated valley in the north-eastern part of the High Tatras1 mountain range which is, like many other areas in the Tatranský národný park (TANAP), accessible for the general visitor during the summer season only (June 15 to October 31).

1 notes, footnotes and references about translations apply for this article in the same manner as for the other blog-posts about the High Tatras on this website

Though a tiny settlement, the actual starting point Tatranská Javorina (1000 meters) is easily reachable by public transport. A bus from Poprad-Tatry or Tatranská Lomnica drives at least hourly every morning and the fare is moderate (about three Euros).

The trailhead has a green marking and lies immediately at the bus stop.

The first three hours of the tour are rather unspectacular from a mountaineering point of view. Of course the nature that unfolds in front of one’s eyes with the Belianské Tatry and the river Javorinka on the hiker’s left is an absolute delight.

Then the appearance of the valley changes quite abruptly to a more or less bleak, mossy and steep terrain with high mountains towering up menacingly in every direction.

The big question for me from this point on was where will be first encounters with larger snowfields, which are no unlikely occurrences in the early summer months in the High Tatras.

The unpleasant surprise came at Sedlo sedielko at last, after I traversed easily the handful of small snow piles that obstructed my way up to the mountain saddle.

The whole passage was covered with a thick, wet and dangerously looking white mass all the way down to Modré pleso (“Blue mountain lake” or “Blue tarn2 “) on 2189 meters.

Turning back was not really an option for me, so I had no other choice than to put my crampons on, fetch the ice axe and climb down in a sort of a “free solo” the first hundred-odd meters.

After this I was was able to push forward more quickly for the slope flattened out a little, but I needed one and a half hours to complete the distance between Sedlo sedielko and the Téryho chata (what usually takes less than half the time).

Descending from the Téryho chata to Starý Smokovec is the familiar and easy part. Actually, as this section is opened all year round I hadn’t to reckon with any more unpleasant surprises and could relax and enjoy the nature in the Malá studená dolina.

Crossing Javorová dolina, negotiating Sedlo sedielko and descending to Starý Smokovec took me ten hours and is a comparatively tough endeavour. It should be embarked upon only if weather conditions are appropriate. A fair amount of experience in mountaineering is mandatory as well.

An alternative tour from Tatranská Javorina is a blue marked path through the valley Zapadné Meďodoly along the foothills of the Belianské Tatry, which is certainly a good choice in the case of unpredictable weather conditions.

Anyway, the hiking season has just started and I am looking forward to further small adventures in the late summer.