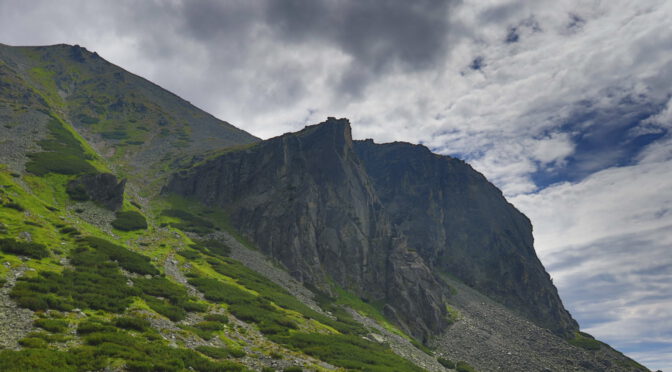 After I had visited the High Tatras mountain range two times during the past year (August and October), I made further extensive tours this summer.

This time those tours were supposed to be more difficult.

At least slightly. Otherwise I wouldn’t find any good reason for visiting the High Tatras again without having a challenge of sorts to begin with.

Though I love being in Slovakia and in the mountains, it is not necessarily about one specific location on the map. It is about doing something uncomfortable and discovering unknown territory, what gives you an opportunity to grow.

I’ve published several articles about the High Tatras1 on this website, and basic information about the popular mountain range you can find here.

I didn’t want to steer for one of the for me yet unexplored summits on my first days in north-eastern Slovakia (such as Jahňací štít, the easternmost peak in the High Tatras). That would rather be a task for later on, if time budget and weather allowed it.

The plan was to hike through some of the elongated valleys in the High Tatras and to negotiate two particular mountain saddles: Bystrá lávka and Priečne sedlo (colored orange on the map below).

I picked the Bystrá lávka mountain saddle as my first destination to reach on a mostly dry August 3.

The most convenient starting point of the tour to the Bystrá lávka mountain saddle (the translation reads more exactly “Bystrá crossing” and must not be confused with the actual Bystré sedlo) is situated in Štrbské Pleso (1346 meters AMSL, i. e. Above Mean Sea Level; every height stated below is AMSL) in the western parts of the High Tatras.

The ascent leads on the first half of the tour through Mlynická dolina (dolina is the Slovak word for valley), and the imposing mountain scenery and the rough nature unfolding in front of you is absolutely breathtaking. Perhaps the best experience of this kind in the whole High Tatras mountain range.

Along your way you have to walk across many bizarre granite rock formations and boulders that are for the most part constituents of the giant stone moraines in the dolina.

And then there are of course the splendid mountain lakes (plesá2), with the Capie pleso as a very large one on 2075 meters. It is a good idea to have a short rest here before entering the final stage of the ascent.

Climbing up to the saddle (2300 meters) is merely for a short steep section difficult however, and only on the last few meters you have to make use of the attached chains and the other metal supports.

The yellow marked path ends on 1450 meters in a red marked trail, the Tatramagistrale. On this trail I marched back to the train station in Štrbské Pleso.

In sum, the tour took me around seven hours and I really enjoyed every minute of it.

2 note: jedno pleso (one lake), štyri plesá (four lakes), päť plies (five likes); this is a peculiarity in Slovak where you have to use the genitive plural form in case the amount of items exceeds four

The ascent to Priečne sedlo (“Transverse saddle”) demanded some preparation and research beforehand and was therefore not an ad-hoc tour as opposed to the great majority of my other tours.

I already hiked parts of the circular tour in June, namely the part between Starý Smokovec (1010 meters), the Zamkovského chata (1475 meters) and the Téryho chata (2015 meters) refuges (green marked trail).

So I had somewhat an idea about my personal expenditure of time for this distance (which constitutes about one third of the tour), as well as my level of fatigue before starting the actual climb.

Furthermore, I paid close attention to the weather forecast on this very day and consulted in addition the tourist information in Starý Smokovec whether it is technically and weather-wise possible to climb up to the mountain saddle. And I also had my crampons in reserve, just for the case (you never know in the High Tatras, even in August there can be snow along the trails).

As soon as you have the scarp slope with its chains and metal steps in front of you after crossing Malá studená dolina (I needed about one hour from the Téryho chata to the foot of Priečne sedlo) you are glad you had done this preliminary work.

However, climbing up the precipice itself wasn’t overly time consuming and slightly easier than I had assumed (in hindsight, everything appears easier I suppose; internet-sources claim a difficulty of  B/C for the climb).

The difference between the time stamps of my first and my last photo at the via ferrata was hence just about twenty minutes to my surprise.

Time consuming (yet not technical) was my hike back to Starý Smokovec through Veĺká studená dolina (“Big cold valley”) though, including short breaks at the refuges Zbojnícka chata (“Robber’s cottage”, 1960 meters) and Rainerova chata (1301 meters).

The whole tour summed up eventually to ten hours, and I think I earned my beer at the hotel bar in Poprad on this day.

As always, I am keen to find slightly more challenging future projects.

Such a project might be a guided tour to Lomnický štít or Gerlachovský štít, if I visit the High Tatras again (meanwhile, you can check the photo galleries on this website for further impressions about the High Tatras 🙂 ).

Or maybe something else. Time and a new lockdown (hopefully not) will tell.

Priečne sedlo – it’s not so hard