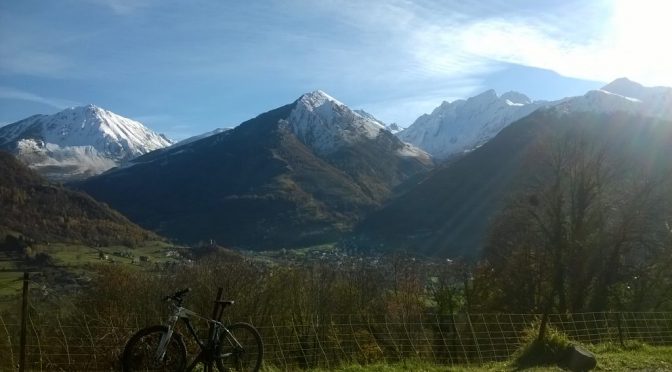 I am on around 1300 meters altitude and the snow is glittering in the early afternoon sun.

It is the beginning of December, but I am wearing a simple cotton T-shirt while standing at the roadside ditch, my hands on the handlebar of my MTB.

As I was climbing up this mountain half an hour ago, a jeep was passing me by, and the French driver asked me through the lowered window whether I am okay, with a curious (or rather concerned) expression in his face.

How I look right now is one of my lesser concerns, and cold sweat is still standing on my forehead.

It is quite lonely here. There are some housings and one can see cars driving down the slope occasionally, but I’ve seen no inhabitants around for a long time.

A technical problem interrupted my climb all of a sudden. My pedal broke apart five minutes ago, and I have of course nothing in my backpack to repair, let alone replace it.

I am about 800 meters altitude difference short of my goal, the Col du Tourmalet (Tourmalet mountain pass), and in about thirty kilometers distance from my hotel and any bike workshop.

As one can probably imagine, it is not a very comfortable experience standing somewhere in the French Pyrenees with an out of service MTB during a cold winter day.

I should come up with some sort of plan before the cold gets hold of me here in my inappropriate outfit.

At the end of 2016 I visited the Pyrenees (French: Pyrénées) for the first time with a bike in my luggage, but without a clear idea what to expect.

The Pyrenees represent the geographical border between France and the Iberian Peninsula, and they are a popular destination for outdoor-enthusiasts who love skiing, hiking or cycling.

The summits in this mountain range are well over 3000 meters, with the Pico de Aneto as its overall highest elevation (3400 meters AMSL, i. e. Above Mean Sea Level; every stated height in this article is AMSL), and the Vignemale as the highest peak in the French part (3300 meters).

The Pyrenees are the setting for some of the mountain stages of the Tour de France in July.

The most notorious stage is arguably that across the Col du Tourmalet (2115 meters, col means mountain pass), the highest mountain pass that can be traversed by motor vehicles in the French part of the Pyrenees.

As I was overlooking the valley from my exposed spot, I reckoned that it couldn’t be such a big deal to get back to Luz-Saint-Sauveur and to my hotel in Argeles-Gazost (Agos-Vidalos), respectively. It was entirely downhill, so I did not need a driving gear at all. Just let gravity do the work.

But this meant that I had to abandon my tour right now, there was no other option apart from that. It was Friday evening, and I had to find a bike workshop on short notice.

So I fastened the loose pedal with a cable tie in order to have some support for my foot, and commenced rolling back towards the valley. As I arrived at the tourist-office in Argeles-Gazost two hours later I found it open – what luck outside the season!

The girl who was working there was a priceless help. I got the address of an open bike workshop in Lourdes, and so I was able to buy a replacement part and conceive a further attempt the next days, provided weather conditions remained favorable.

When you climb the Col du Tourmalet you have to conquer 1252 meters altitude difference stretched over seventeen kilometers.

The grade on the route is between seven percent and ten percent for the most part, which is quite intimidating when you are a bloody amateur like me.

So the days before I tackled the Col du Tourmalet for a second time I scheduled some light training sessions, intended both as preparation as well as recreation.

Just beautiful is running on the voie verte, a bike trail of around eighteen kilometers length from Lourdes through Argeles-Gazost to Pierrefitte-Nestalas.

Cycling from Luz-Saint-Sauveur onto the Luz Ardiden is also an adequate preparation since the steepness is very similar to the Col du Tourmalet, but the length of the trail is only about nine kilometers.

As the day of my second bid for the peak ultimately arrived, I was anxious. Would it work this time?

My first stage was once more from Argeles-Gazost (my hotel was on around 450 meters) to Luz-Saint-Sauveur (on about 700 meters), where the endless seventeen kilometers up-hill were waiting for me.

Yet there would be a further obstacle: I would have to hike the final two kilometers through a thick layer of snow since the mountain pass was actually closed for all vehicles due to the wintry weather conditions (a usual winter closure). Aside from that, weather was perfect.

Nevertheless I calculated with about three hours for the ascend which would have been quite sufficient in terms of using the daylight most efficiently.

I plugged in my earphones and started my journey at the first sign – every kilometer of the trail has a white rectangular road sign that provides you with information about the current altitude, the average grade (moyenne de la pente), and the distance to the summit.

The first six or seven kilometers I completed quicker than a few days ago without any major difficulties.

After I passed Barèges, the last small town on the western ramp on one’s way to the Col du Tourmalet (and in whose proximity my pedal fell apart on my first attempt to reach the summit – no part of my bike would refuse its service this time), it was getting tremendously exhausting with every 100 meters passed.

The cold was not the problem since I was cycling up-hill. Quite the opposite, I was sweating heavily.

But my body showed more and more signs of fatigue. It was getting unbearable as I passed the ten kilometers sign, and I slowed down decisively. What confronted me with the serious problem that I was getting measurably off-schedule.

I noticed also more and more snow (more snow that I wanted to see), but no people. I was one solitary figure around here.

In about three kilometers distance from the sommet, a heavy and deep cover of snow was hiding the streets. It was shortly after three o’clock, and there was not much time left before sunset.

Cycling was no longer possible at this point. I dismounted my bike and carried the eleven kilograms on my back the next one and a half kilometers, until I reached what appeared to be the last serpentine. It was half past four.

As I was trudging through the snow while watching the sun approaching the horizon and trying to protect my face against the icy wind, I got an uneasy feeling in my stomach.

It seemed that it was pretty naïve to assume I could hike the last one or two kilometers smoothly, more or less.

Who cares if I hike the last kilometer anyway, there is just one further geographical point, isn’t it?

So I tossed the bike and my backpack into the snow and prepared for one last photo with my small self-timer camera. Then I walked the two kilometers retour, climbed on my MTB and headed back down.

Later in the hotel I pondered over the question whether I was poorly prepared and kind of negligent, or whether I made a successful tour and quitting was wise at this point.

One thing is for sure in any case. I have very good reasons to come back to this splendid mountain area one day.