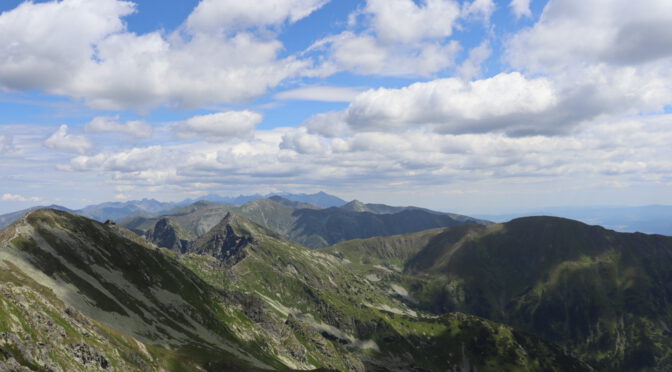 The Západné Tatry (Western Tatras) mountain range in Slovakia has slipped my attention as a destination for hiking and mountaineering tours until quite recently.

The uninitiated not only tends to confuse the western part of the High Tatras (where the famous peaks Kriváň and Rysy are located) with this mountain range, but also it gets vastly overshadowed by the popularity of its eastern counterpart.

It took me some time until I found out convenient access points which were reachable by public transport, for the tourist infrastructure is far less extensive as in the High Tatras, or other mountain ranges in Central Europe for that matter.

Comparatively easy is the access by means of a direct bus connection to the Žiarska dolina entrance point (there is also a big parking lot), starting at the train station in Liptovský Mikuláš. The bus drives about every two hours during the summer months and, as usual in Slovakia, the fare is fairly cheap (less than two Euros).

One reason for the lesser popularity of the Západné Tatry may be that is has no peaks which exceed the 2250 meter mark. Bystrá is the highest, boasting a height of 2248 meters AMSL (Above Mean Sea Level; every height stated below is AMSL), followed by a mountain named Jakubiná with 2194 meters.

Geologically, the Západné Tatry resembles strongly the Belianske Tatry (consisting mainly of limestone rock that is), what leads to a similar and very distinct vegetation. It appears greener, pristine and not as destitute of vegetation as the flora in the High Tatras that lies bulkily between those two smaller1 mountain ranges.

1 as to the total area, the Western Tatras are slightly larger than the High Tatras, as a matter of fact

The Baníkov mountain is the highest peak (2178 meters) of the Western Tatras main ridge, and getting to the top was my goal on a oppressively hot summer day in mid July.

Ascending the mountain is easy, after all, and can be done from the Žiarska chata (1325 meters) in about two and a half hours by following a green marked trail. Water sources are abundant, so one shouldn’t plague himself carrying too much load in form of liquids.

The Žiarska chata itself can be reached doing an easy walk through the Žiarska dolina on a blue marked trail, negotiating an altitude difference of about four hundred meters in sum.

The area around bears historical significance. In the end phases of the Second World War, fights were taking place in and in the vicinity of Žiar, and the building which today is the Žiarska chata was occupied by a medical special unit of the Slovak resistance.

It is surely not the challenging ascents or descents what makes tours such as the described worthwhile, but the splendid nature and the extensive and stunning view towards the other mountain ranges in Slovakia.

So it is only a matter of time when I come back to this place for exploring further parts of the Západné Tatry, lying so close to the for me familiar peaks of the High Tatras.