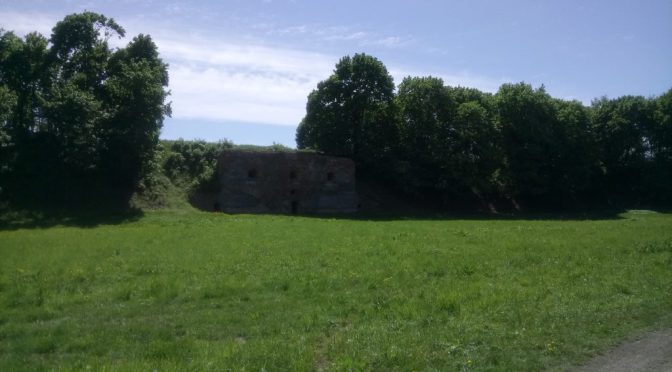 My mother’s parents are from small towns near Wrocław, a city in Lower Silesia which belongs to Poland since 1945.

My grandparents met in the mid-1930s as my grandfather was working as a butcher in and around Breslau1 (which was the German name of Wrocław) and my grandmother was occupied in her father’s business (Konditorei) in Breslau. They quickly fell in love and married at the end of 1939 only a few weeks after the 2nd World had broken out.

The ancestors of my grandparents had been living in the region of Lower Silesia (Niederschlesien) for presumably over five hundred years, and they were to great extent descendants of German settlers from the Rhine area (“Ostsiedlung“).

But in my family tree there exist further ancestry lineages, namely Ukrainian and Polish, as well.

I learned that from genealogical DNA tests and from historical records like so-called “aryan certificates” (“Ariernachweis“), which were compulsory documents in the German Reich as my grandparents were young adults.

On that account, I will provide you a very personal blog-post about that country I have more emotional connection than to any other country I have visited so far.

It is both a short travel-experience illustration about Poland as well as a depiction of my family roots in a region which bears the name Województwo dolnośląskie today.

1 German names of places, sights, cities etc. will be rendered in italics in this article

I visited Poland in April 2000 for the first time, with close family members and my grandmother (who unfortunately passed away in 2005).

We were solely in Wrocław and in some of the small towns around, where my grandmother recollected memories of her childhood (see paragraph 3 – Genealogy).

Except for Łódź and Gdańsk, I’ve visited every major city in Poland in recent years.

In the following, I want to give some background information about Kraków, Warszawa, Poznań and Szczecin.

Unfortunately I cannot offer any up-to-date photographs about Breslau at present (but I am sure there are enough blogs out there offering beautiful photos of the city). There will be further articles about Poland on this website in the near future.

Most people would pick Kraków (750.000 inhabitants) in the south of Poland (Województwo małopolskie) if they had to choose one destination for a tourist visit.

The main reason is that Krakau is one of the oldest cities in Poland and escaped structural damages during the 2nd World War (Kraków has escaped war devastations for eight hundred years), though a great percentage of the inhabitants of Kraków, the Jewish inhabitants in particular, did not survive the German terror régime.

I visited Kraków twice, not least because of the convenient direct flight connection from Nürnberg to Krakau (duration around one and a half hour).

The Wawel-complex on the Wawel-hill is an absolute must-see. It comprises essentially the Wawel Cathedral, where the Polish kings had been crowned until 1795, and a castle with several annexes.

Only a few hundred meters away from the Wawel lies the Rynek Główny (Hauptmarkt), the vast main square (two-hundred meters wide and two-hundred meters long), with dozens of historical buildings, plenty of shops, boutiques and restaurants and hence usually crowded with tourists.

What you also shouldn’t miss is the historical district Kazimierz and the district Nowa Huta (“New Steel Mill”) in the far east of Kraków, the latter a testimony of the communist era and the planned economy during that time.

Further notable sights – among many others – are the Fabryka Schindlera (Schindler Factory), the Wieża ratuszowa (Town Hall Tower) and the Barbican (fortification).

Among all cities in Poland I’ve visited so far, I spent the most time in the capital Warsaw.

Warsaw has probably the most tragic history of all cities in Poland.

The capital was for the Nazi-ideologues in the 2nd World War the embodiment of the (what they considered) inferior Polish culture. Already heavily devastated during the German invasion of Poland (Polenfeldzug), the city was completely razed to the ground in the aftermath of the Warsaw Uprising in 1944.

Rebuild measures were carried out soon after the war, with many architectural manifestations of the forced communist system in Poland and with the Palace of Culture and Science as the most prominent example.

The 21st century Warsaw is for the most part what one would expect from a prospering capital in Eastern Europe with roughly two million inhabitants.

A noisy, bustling, and exciting place that has a low unemployment rate, an amazing nightlife, and an abundance of cultural offers.

Among the many sights one must not miss are the Zamek Królewski w Warszawie (Royal Castle), the Muzeum Powstania Warszawskiego (Warsaw Uprising Museum), Stadion Narodowy (National Stadium) and the Piłsudski Square (see video).

Praga is situated on the eastern bank of the river Wisła (Weichsel).

This district was not devastated by the Germans after the Warsaw Uprising in autumn 1944, because the Red Army had already taken the eastern areas of the city at that point.

So unlike the western districts, it is possible to see older building structures when one makes a stroll through these quarters.

The city of Poznań changed hands many times in the course of the centuries, but belongs to Poland since 1920 (except a brief period during the 2nd World War).

What most intrigued me about Posen (0.5 million inhabitants) were the Ratusz w Poznaniu (Poznań Town Hall) on the Old Market Square, the Poznań Cathedral and the Brama Poznania, a museum near the cathedral.

The Poznań Cathedral has a history of more than one thousand years. Inside the cathedral, you can take a look at some of the remains of the medieval walling.

Szczecin (0.4 million inhabitants) lies a few kilometers beyond the German border at the Stettiner Haff, just sixty-odd kilometers away from the Baltic Sea.

Like other cities in the Province of Pomerania, Stettin belonged to Germany until 1945.

If you are short of time I would recommend visiting the Wały Chrobrego (Hakenterrasse) at the southern bank of the Odra (Oder) and the Plac Brama Portowa (Berliner Tor) near the Centrum, at the very least.

As my mother’s parents planned to marry in 1939, Nazi-Germany demanded proof for “aryan” lineage.

I am in possession of “Ahnenpass“-copies of my grandparents, official and certified documents which served as so-called “aryan certificates” during that time.

Which notable facts as to my family history do exist?

Almost all my mother’s forebears were born in small towns in Lower Silesia (Niederschlesien). My grandmother was born in 1919 in Kunersdorf (which bears the name Długołęka today), my grandfather in 1912 in Pohlsdorf (Pawlikowice).

Some arguably Polish surnames are decipherable in the ancestor passes (such as Nowak or Brutscheck), but most were common German surnames like König, Wagner, or Schuster.

Warschau was the birthplace of the grandfather of my grandmother, but exactly here my family traces get blurry and obscure.

By and large, my forebears were simple people from the countryside in Lower Silesia who made their living as butchers, bakers or gardeners.

My mother’s birthplace wasn’t Lower Silesia, but Weiden/Oberpfalz in Bavaria where my grandparents found a new home after they were expelled by the Red Army in 1945.

Other family members fled to North Germany or to that part of Germany that later became the “German Democratic Republic” (GDR).

An illustration of Breslau is missing on here however. But the city will surely be subject of a future article on this website.