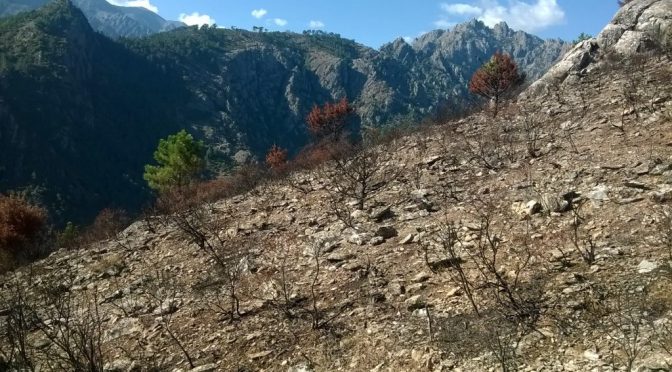 Socializing during a hiking trip is great, especially when you hike on an exceptional and challenging trail like the GR20 (Grande Randonée 20) on Corsica, France.

And where else do you have the opportunity to take photos with high altitude mountains and the Mediterranean sea on it?

Word of mouth about the beauty of the unique nature still hasn’t spread yet it seems, access to the island is comparatively difficult, the GR20 has the reputation being the hardest hiking trail in Europe, and so you find yourself consequently in a place not really besieged by lots of tourists.

After one or two days of hiking on this trail you understand a little better why the GR20 is labeled as one of the hardest.

There is little that can be called comfortable. You’ll sleep in a tent, if you choose not to sleep in a shared room at one of the camping sites that has to be booked beforehand.

Climbs tend to be very exhausting, quite risky at times too.

Oppressive heat and, most important, the heavy backpack with all your essentials (mine was about fourteen kilograms with two water cans).

And when you have great luck and there does exist a shower at one of the bivouac sites: water is ice-cold, and you search in vain for a standard of cleanliness that you are used to.

I hiked for four full days, from the train station in Vizzavona in Central Corsica to Zicavo in the south (I made an additional hike around Corte in Upper Corsica after this, but that was not part of the GR20).

A trip with the meter-gauge railway from Bastia to Vizzavona (or further to the capital Ajaccio) is an adventure in its own right, so even if you are not planning to make a several days hike I would highly recommend to make a train ride with the U Trinighellu at least.

The south of the GR20 is deemed to be the easier section of the long-distance trail crossing the island, that means more precisely the part between Vizzavona in Central Corsica and the town Conca, situated on the island’s south-eastern coast.

“Wild camping” is not allowed, so it is normal to see the same people at the bivouac sites every day, what is a good prerequisite for socializing.

So as it happened, I made friends with a young outdoor-enthusiast from Alsace at my starting point in Vizzavona on the very first day as we bumped into each other at the water-boiling spot.

And then, we spent the next four days together and looked after one another, shared even our food sometimes – which was for the most part crackers, bread and other stuff which hadn’t much weight but was rich in calories.

He was by far the tougher hiker. He had yet accomplished the entire north-route (he started in Calenzana), and now he was about to complete his trip in the south of the island despite an injured foot.

His English skills were solid, and due to my lack of knowledge in French we communicated solely in the common lingua franca.

During my third day I made friends with a young woman who I had seen several times at the camping sites the previous days. Now she ran into me occasionally as we were proceeding towards the next refuge (Refuge de Prati).

I approached her as she was sitting on a rock for a short rest, a big smile across her face. She was nineteen and studying medicine in Lyon, as I soon learned. She also hiked solely the south of the GR20, but not on her own as I did but with her parents.

She was fast and tough, and it didn’t cost her much effort to outpace me without dropping a sweat.

And she was the nice person that I’d expected, as she invited me to sit next to her and her parents in the evening at the bivouac site, where we took our evening meal and had some entertaining conversations (I did my best to speak some French, but je ne parle pas très bien).

During a rest I talked to an experienced Frenchman, who explained why the GR20 is still comparatively low-frequented by visitors (the reason is first and foremost the grade of difficulty), and he told me that it had been the Germans who made this trail accessible a few decades ago. And yes, I noticed indeed many German hikers on the GR20.

There had also been somewhat dangerous moments during my tour.

For example, as my remaining quantity of water was nearly exhausted during my fourth day with the only water-source on the trail being dried up (it was August, after all). Or as I got lost in an area that had been devastated by a forest fire with all red/white markings erased (near Gialgone).

In hindsight, these were just minor irritations and spoiled my adventure not in the slightest.

Rather funny than dangerous are encounters with animals such as wild boar, who can appear all of a sudden from the underbrush. Unfortunately, I hadn’t my camera within reach on any of these occasions.

The entire GR20 comprises sixteen stages, of whom I made solely four and a half of the seven in the south.

So there is no question to visit Corsica again to repeat this great experience, yet the next time in the north of the Mediterranean island.

4. Details of the tour

Every height stated below is AMSL, i. e. Above Mean Sea Level.

Featured Image: in the proximity of Corte, Haute-Corse