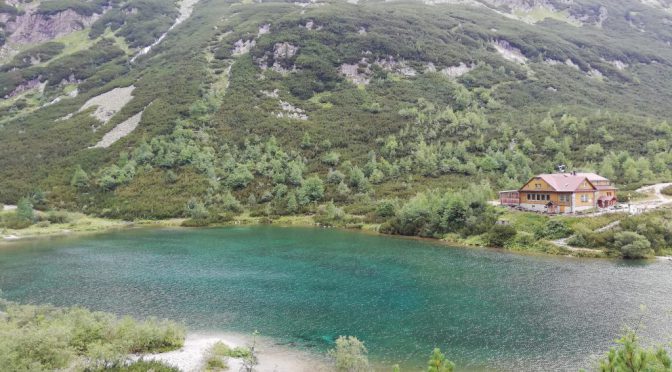 The first time after my sabbatical in spring, I returned to my second home Slovakia.

I was looking forward to a hiking adventure in the High Tatras mountain range, where the general visitor is allowed to ascend the prominent summits from late spring to autumn (unlike to e.g. the Low Tatras where visitors have access the entire year).

Before I went by train to Poprad-Tatry in the Prešov Region where I was going to stay for one week, I spent one day in the capital Bratislava for meeting with my Slovak friends, and to enjoy the evening at the Danube.

The city of Poprad(-Tatry) in the Prešovský kraj (north-eastern Slovakia) suggests itself as a base for hiking tours through the High Tatras on grounds of its location at the south-eastern foothills of the mountain range, and its size (50.000 inhabitants). So you won’t find there an infrastructure solely designed for tourist needs but also supermarkets, shops of every kind, and a nightlife.

It takes around three and a half hours from Bratislava to Poprad with the fast train connection, and the price for a ticket is about twenty Euros.

You’ll search in vain for intriguing sights in Poprad, but you’ll find quite a lot of large rather ugly hotel complexes which bear resemblance to the “Paneláky” from the communist era (disregarding their appearance, there is everything okay with the hotels and I made only good experiences).

In Poprad exists a convenient train connection directly into the High Tatras: the meter-gauge Tatranské Elektrické Železnice (TEŽ) to Starý Smokovec, Tatranská Lomnica and Štrbské Pleso. Those towns are ideal starting points for exploring the highest peaks in the High Tatras as well as the unique nature and culture in the region.

The High Tatras1 – sometimes referred to as “the smallest high altitude mountain range in the world” – extend for the most part over Slovakia, but Poland has shares in them as well (about one fifth belongs to the northern neighbor of Slovakia).

It is without doubt the most popular tourist-destination in Slovakia beside the capital Bratislava.

The Slovakian part of the mountain range is not accessible for visitors from November to June. Environment protection laws prohibit access to higher altitudes in more sensitive areas. Respective trails are marked with a corresponding information sign and cannot be overlooked.

Guidelines for a stay in the High Tatras you can find here: tanap.org.

This restricted access is rather the exception in Slovakia. In other mountain ranges you are generally allowed to hike at any season of the year.

And if you want to build up a tent: that is strictly forbidden! According to the tourist info in Starý Smokovec, there exist two camping sites in the High Tatras where it is permitted to camp: one near Štrbské Pleso, and the other in Tatranská Štrba (Horská 40).

1 Slovak: Vysoké Tatry; vysoké is the plural form of vysoký, -á, -é and the Slovak adjective for “tall” or “high”

Slavkovský peak (the English word for štít) is 2452 meters AMSL (Above Mean Sea Level; every height stated below is AMSL) high, and you can ascend the peak from Starý Smokovec (1010 meters) on the blue marked path in about four hours.

The ascent itself is not particularly interesting (it resembles a bleak stone desert in sections) and the tour does not provide as many good view points and nature experiences as other tours in the High Tatras might do.

One noteworthy exception is Slavkovská vyhliadka (on 1531 meters), from where you can contemplate the second highest peak in Slovakia, Lomnický štít (2634 meters).

From the Slavkovská vyhliadka view point on, you have the Veľká studená dolina (“Big cold valley”) on your right hand side, which offers some nice panorama views and good opportunities for taking photos.

After crossing several smaller and bigger stony rises, including the Nos rise on 2273 meters, I was happy to enjoy my very first view from a prominent summit of the High Tatras.

But I hadn’t really considered the vicissitudes of nature in high altitude mountains, and I was overtaken by a thunderstorm literally minutes after beginning my descent from the peak.

I had a lot of troubles climbing the way down, as it was difficult to keep my footing on the slippery rocks. I fell down twice, ruined my trousers, but suffered fortunately no major injuries except a few bruises2.

2 it may sound elementary, but it is really important to pay attention to the weather forecast before you set off for a trip in high altitude mountains – thunderstorms can be a deathtrap, near a peak and near via ferratas (metal) in particular

The peak Veľká Svišťovka that I was steering for on this day boasts a height of 2038 meters, offering a comparatively easy ascent.

However, on this tour in the eastern parts of the High Tatras mountain range you hike rather for seeing the gorgeous mountain lakes than for this particular peak, which lies roughly midway between the Skalnaté pleso and the Zelené pleso (red marked path).

My starting point was the green trailhead at the train station in Tatranská Lomnica (850 meters), the largest town in the High Tatras. The green marked trail leads directly to the Skalnaté pleso lake, an on the first half comfortable walk.

The weather was really bad and it was raining most of the time, so I encountered almost no other hikers on this August day.

My descent from Veľká Svišťovka, where there wasn’t much to see because of the dense fog and an overcast sky, led me towards the Dolina Zeleného plesa valley.

Here two of the larger mountain lakes in this area can be marvelled at: Čierny pleso and Zelené pleso.

The mountain lake Zelené pleso got its name evidently from its peculiar color (zelený, -á, -é  is the Slovak adjective for green), and an exceptionally gorgeous lake it is.

The cottage Chata pri Zelenom plese, situated next to the lake, is a very popular destination for tourists, and even on this rainy Wednesday most of the tables were occupied.

And so somewhat unexpected after my for the most part solitary tour this place turned out to be a good location for getting in contact with fellow hikers, and I made friends with two girls from Gdansk (Danzig).

From Zelené pleso you also have the opportunity to proceed to Jahňací štít, the easternmost peak in the High Tatras (2230 meters). It was quite late in the day, so I headed back to Tatranská Lomnica on the yellow marked trail.

Close to Tatranská Lomnica stretch the Belianske Tatry, by contrast with the High Tatras a small mountain range with a very different geological composition (limestone rock in lieu of almost entirely granite rock).

The different soil structure leads to a distinct flora, which appears greener, pristine and not as destitute of vegetation as the mountain ranges in the east.

Kopské sedlo, a mountain saddle a few kilometers northwards of the Zelené pleso lake, represents the transition point between the High Tatras and the Belianske Tatras.